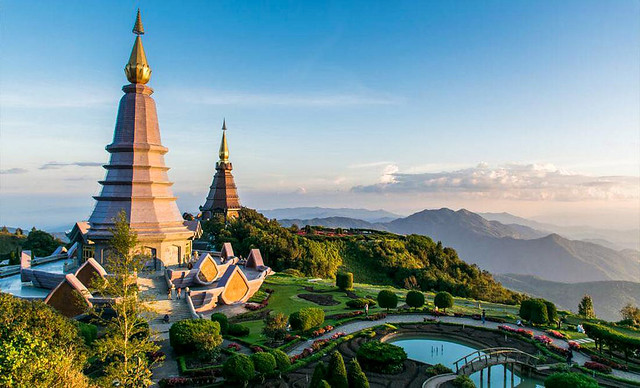 Doi Inthanon is the tallest mountain in Thailand. Standing at 2,565 meters above sea level, it is dubbed The Rooftop of Thailand. Doi Inthanon National Park is a very popular place for a day trip from Chiang Mai, especially during the winter i.e November to February, due to its great plentiful nature and the rarely seen phenomenon of frost.
The weather at the peak of the mountain is cold and clouded with mist all year round and the temperature never exceeding 17º C.

Here are a few of the many reasons why one should visit the 482 km² Doi Inthanon National Park: the eponymous peak is the highest in Thailand; the hiking trails surrounding the peak; the Park includes 1,274 plant species; the area is home to 466 animal species, and it is also dotted with a number of waterfalls of various sizes.
The views from Doi Inthanon are best in the cool dry season from November to February. But don’t expect a rewarding view from the summit, as for most of the year a mist, formed by the condensation of warm humid air below, hangs around the top of the mountain creating an eerie effect. You can expect the air to be quite chilly towards the top, so take a jacket or sweater.
Embed from Getty Images

Things To Do in Doi Inthanon National Park

The whole point of the park is to get as high as you can to see life in a colder climate. At the summit is a sightseeing extravaganza. Almost at the exact summit is a chedi dedicated to the last Lanna King (Inthawichayanon) and beyond is the Ang Ka Trail, a 360m platform walkway through a moss-festooned bog.
Formerly, Doi Inthanon was called ‘Doi Luang’. It was later changed according to the name of the last ruler of Nakorn Chiang Mai, Phra Chao Inthawichayanon. Before he died he ordered that his remain be kept as a shrine on the peak of Doi Inthanon.
Embed from Getty Images
About 3km before the summit of Doi Inthanon there are two large pagodas, the Pra Mahathart Napamaythaneedol Chedi and Pra Mahathart Napapoommisiri, built by the Royal Thai Air Force to commemorate the king’s and queen’s 60th birthdays in 1989 and 1992, respectively. The pagodas are made from colourful marbles. Also, there is sculpture on the wall which represents Buddhist stories around the pagodas.
Surrounding these pagodas is a beautiful flower garden. The park is one of the top destinations in Southeast Asia for naturalists and birdwatchers. The mist-shrouded upper slopes produce abundant orchids, lichens, mosses, and epiphytes while supporting nearly 400 bird species, more than any other habitat in Thailand. Most of the park’s bird species are found between 1500m and 2000m; the best birdwatching season is from February to April.

Another activity nature lovers should not miss is trekking along the 2.78km long Kew Mae Pan Nature Trail. Hiring a guide is compulsory due to the delicate thick forest and the guiding fee is 200 baht per group (not more than 10 people). The guides are local Hmong Hill Tribe people who are highly expert on the route. Take note that Kew Mae Pan Trail is closed during raining season, from 1 June – 31 October every year.
Read Kew Mae Pan Natural Trail, at Doi Inthanon National Park.

The highlight of this well-maintained trail is a clear viewing area overlooking the magnificent mountains view. If the weather is not foggy, that could be an unforgettable life experience.

Embed from Getty Images
There are eight waterfalls that dive off the mountain. Mae Klang Waterfall (at Km8) is at the foot of Doi Inthanon and the easiest to get to.
Wachiratan Waterfall (at Km20.8), is the biggest waterfall with the falls cascaded and tumbled some 50 meters. There is a market close to the waterfall where you can buy delicious fresh fruit, candies, dried fruits, various nuts, etc. There are also restaurants and a coffee shop in the area that serve tasty Thai food and drink at very reasonable prices.
Embed from Getty Images
Mae Ya Waterfall is another big waterfall with 260m tall and up to 40m wide, located some 12km from Chom Thong Village. Without a doubt, Mae Ya Waterfall is a photographic favorite for most visitors. There is a short walk of 600 meters to the waterfall from the main road.

Getting to Doi Inthanon from Chiang Mai

Although Doi Inthanon is the highest point of Thailand, travelling to the park is very comfortable. It takes around 2 hours from downtown to the national park by car. Note that the park entrance fee of 300 baht will be collected at the first checkpoint into the national park.
Since it is the most popular tourist destination in Chiang Mai, you can ask any tour agency in Chiang Mai for a day tour package which will include a visit to the mountain and waterfalls. The price is around 1,000 baht or more, depends on the car they use. The park entrance fee of 300 baht is included, some even with lunch provided.
Some travellers prefer to DIY their trip by renting a car or motorbike as the route can be easily planned by using Google Map or by Waze. But aside from a valid international driving license, make sure the car is in good condition and has a skilled driver behind the wheel.
If you are doing the Mae Hong Son Loop road-trip, you may want to add this national park into your itinerary.
Read The Mae Hong Son Loop Road-Trip, Complete Guide 2019.

Although most visitors come with private transport or on a tour from Chiang Mai, you can reach the park via public transport. Board the yellow songthaew at Chiang Mai Gate to Chom Thong Village (30 baht), and from there catch another songthaew to the summit of Doi Inthanon (80 baht). These songthaew leave almost hourly until late afternoon. Loads of songthaews ply the roads through the park and it is pretty easy to get a ride in either direction.
Or, if you have a group of people to split the costs, you can hire a minivan (with a driver, of course) to drive you there. Tip the driver as he can be your tour guide too. 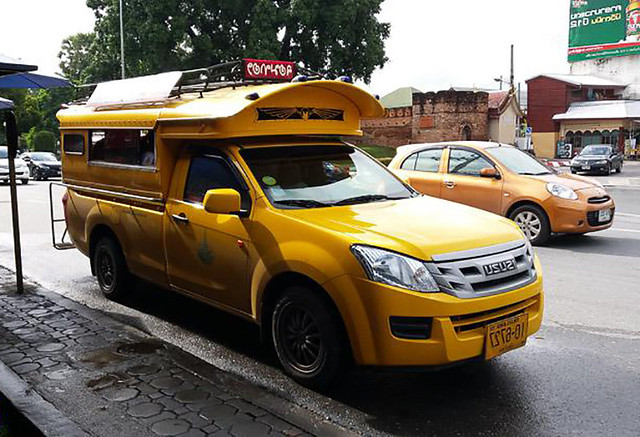 This is the location at Chiang Mai Gate where you can board the yellow songthaew going to Chom Thong:

In the national park itself, there are limited options for an overnight stay. You can rent a chalet or simply camp at their campsite situated not far from the checkpoint where you pay the park entrance fee. A tent can be rent at 250 baht (good for 3 people) which is inclusive of sleeping bags, pillows and mattresses.
The campsite comes with facilities such as bathroom equipped with hot-shower and power socket to charge your phone. Restaurants and markets for your meal are just within walking distance away.
Advanced booking is advised during high season as Doi Inthanon is a popular destination for both Thais and foreigners. Reservation can be done through their official website http://nps.dnp.go.th (available in English). 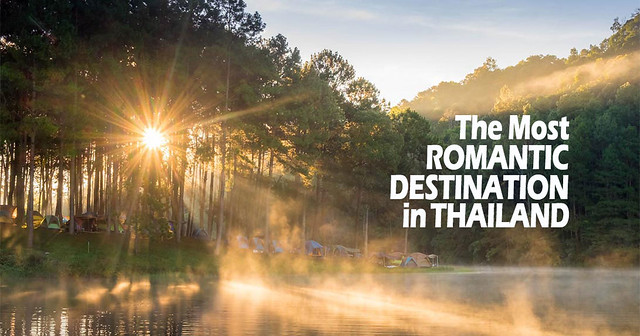 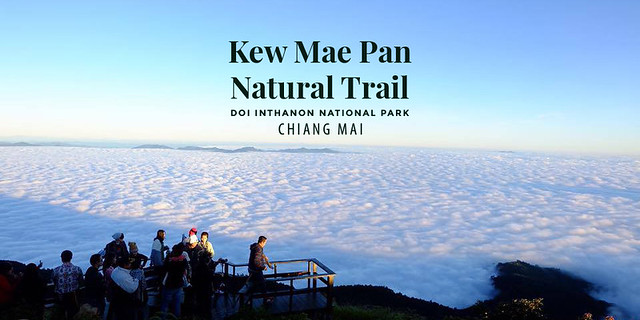 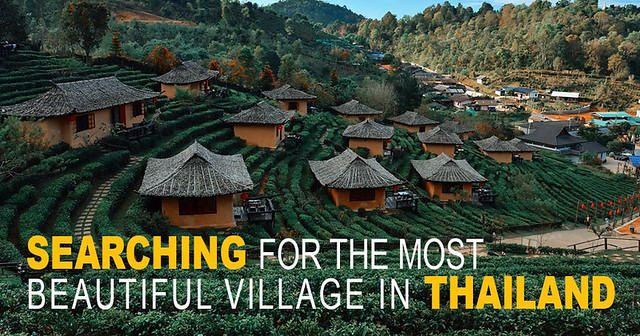 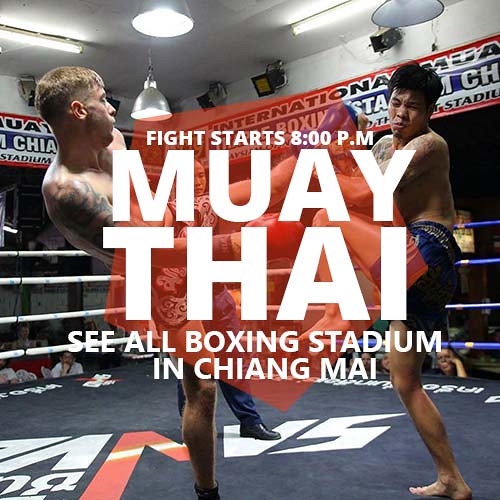 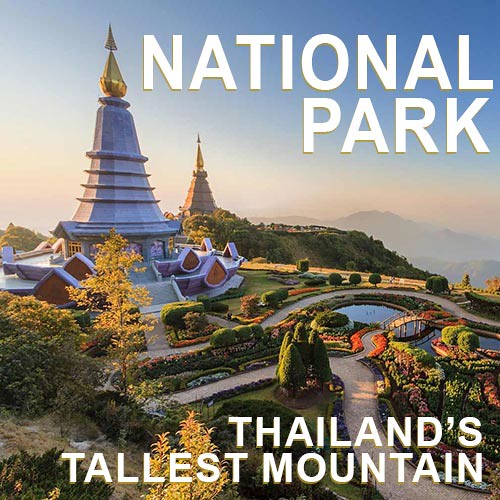 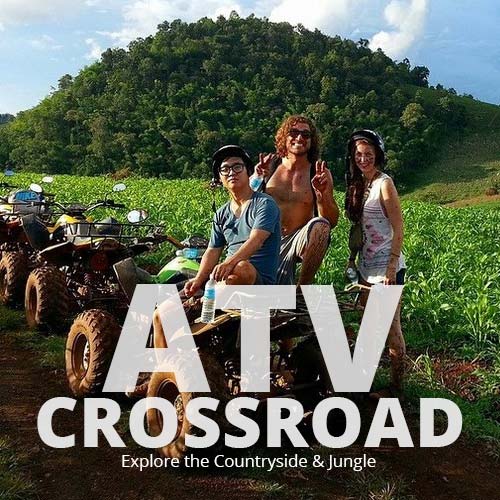 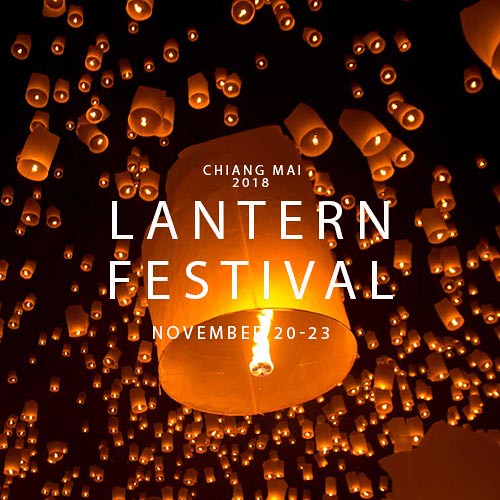 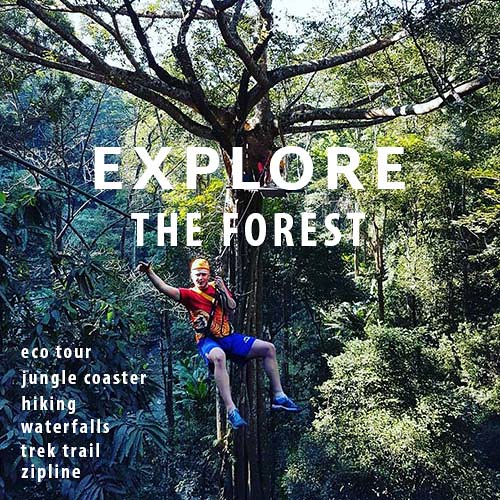 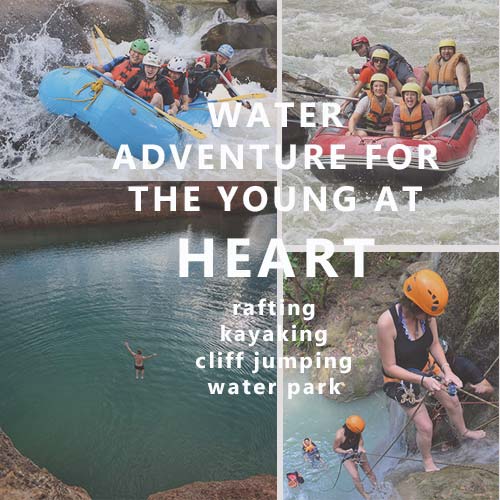 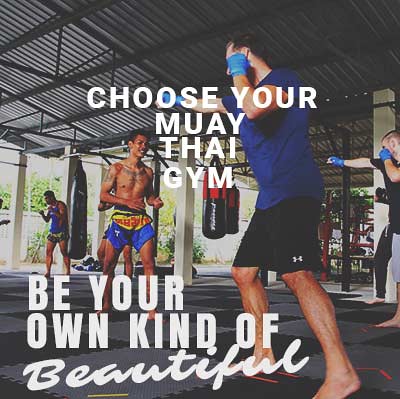 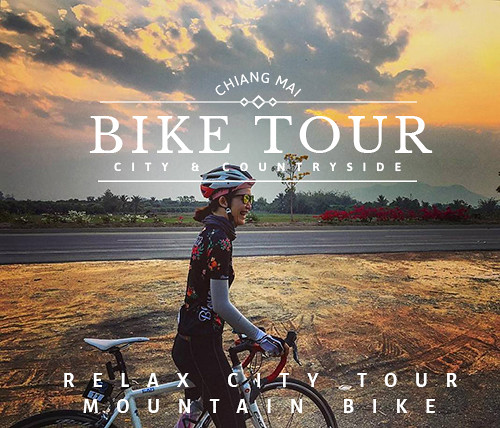 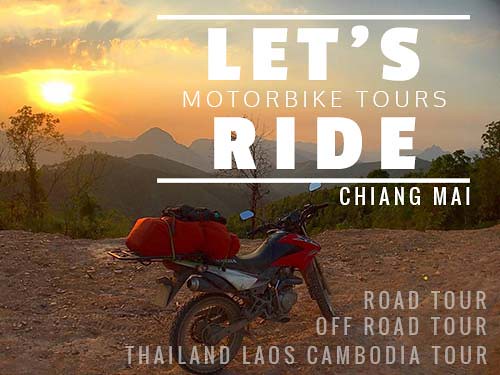 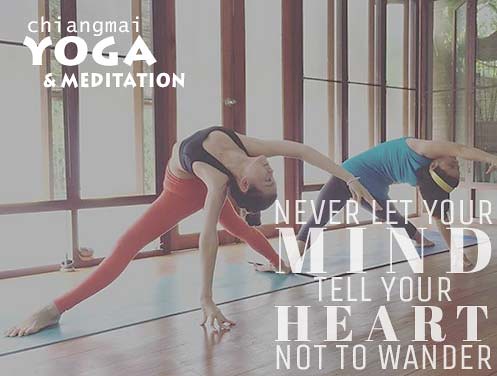 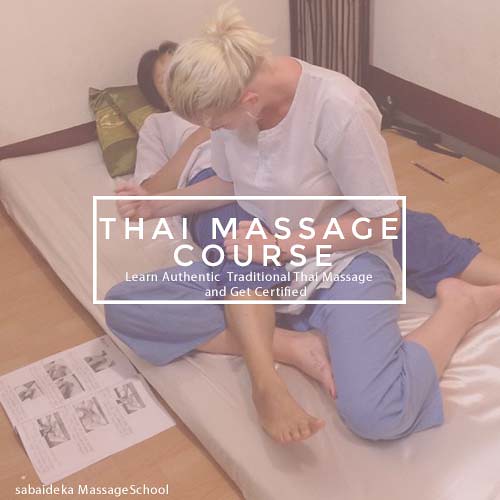 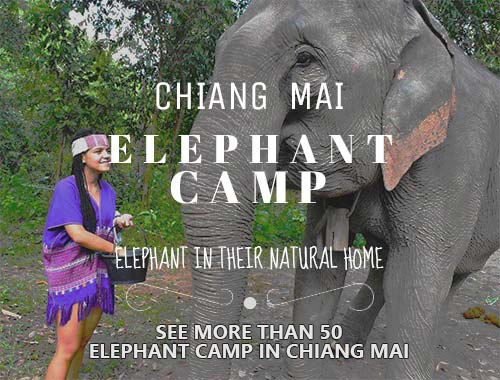 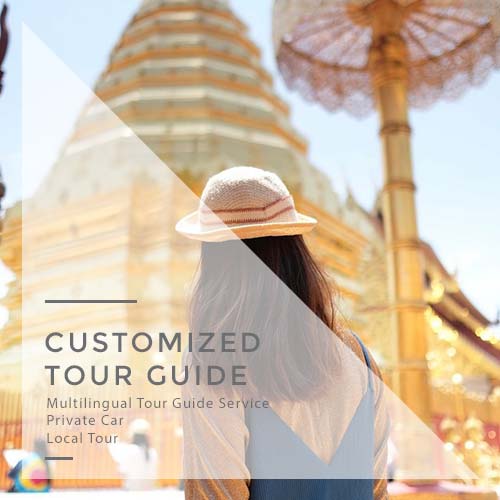 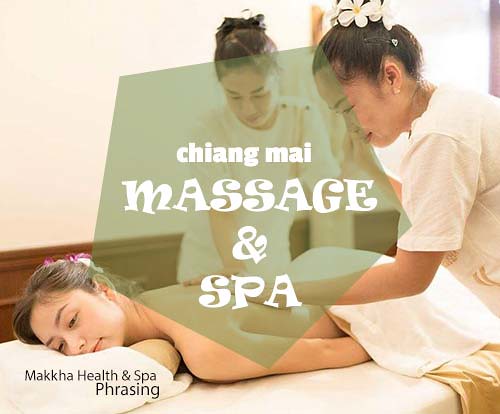 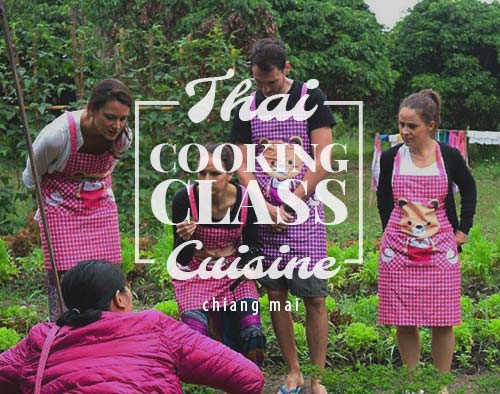 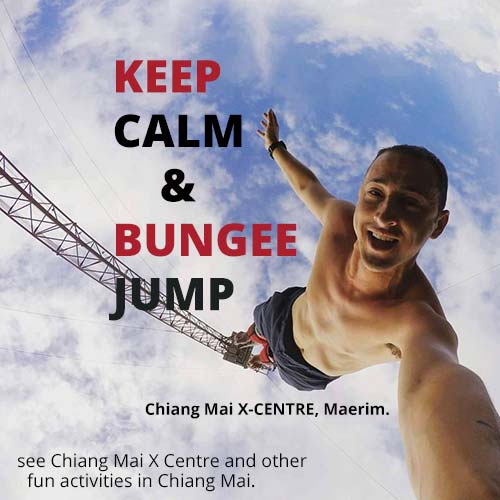 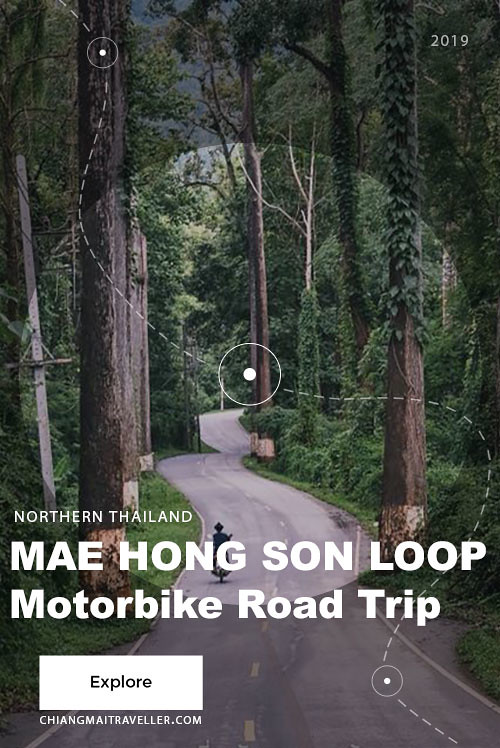